Thomas Fonnesbaek: Where We Belong

By CHRIS MOSEY
September 27, 2015
Aficionados increasingly see Danish bassist Thomas Fonnesbaek as a successor to the late, great Nils-Henning Orsted Pedersen. He is heard here as part of a trio featuring Swedish pianist Lars Jansson, the format that established his reputation.

The album consists primarily of Fonnesbaek's own compositions and others put together on the spot with the trio. There are two numbers from the Great American Songbook—Julie Styne's "Just In Time" and "Beautiful Love" a ballad by Victor Young.

Joe Pass used to perform the latter, joking that he couldn't remember if it was by Victor Herbert, Victor Young or Victor Mature. Woody Allen featured it on the soundtrack of his 1989 movie Crimes and Misdemeanors.

Fonnesbaek also plays—believe it or not—an olfactory opus. This is by Danish classical composer Carl Nielsen. "Solen Er Så Röd Mor (The Sun Is So Red, Mother)" was one of 290 songs and hymns the Great Dane wrote in the hope of evoking the "smell of Danish landscapes," though he admitted it might not work for foreigners. Here there's the consolation of Jansson's wonderfully understated piano accompaniment and the song's interesting intervals... neither of which are to be sniffed at.

Of Fonnesbaek's originals, "Norrland," is a meditation on Sweden's most northerly province, above the Arctic Circle, where in summer the sun shines both day and night (though very often obscured by bad weather) and in winter not at all. No surprise then that the song is dark and dramatic and full of contrast.

"Do It!" is funky and up-tempo, allowing everyone to stretch out a little. Jansson comes on like a latter day Bobby Timmons and drummer Paul Svanberg evokes the tightly controlled polyrhythms of Art Blakey.

While it occasionally gets a little spacey, the album, is nowhere near as weird as the cover makes out. It features an illustration of two men with trees sprouting from their heads, linked via their mouths by what looks like a rope bridge, perhaps a railway line. On a hilltop behind them a temple with open doors is decorated with an eye, presumably of the third variety.

A small anomaly: in his sleeve note Fonnesbaek refers to this as a "live recording" yet there is absolutely no evidence of it; no clapping, coughing or snippets of extraneous conversation. Of course, the audience may well have been too busy trying to smell the music to do any of this.

Track Listing: Norrland; Cooking; The Accounter; First Impressions; No Gluten, Please; Do It!; I Am Who I Am; Where We Belong; Beautiful Love; The Swedish Way; Solen Er Så Röd Mor; Just In Time.

In the summer of 2014, Aaron Parks held a ten-week DIVA (Danish International Visiting Artists program) residency in Denmark. By then, at the age of 30, the American pianist had already achieved an independent sound, but on these two albums arising from his Danish tenure he thrives on the unsolvable riddle of collaboration.

When Parks released his 2013 disc of solo improvisations (Arborescence, ECM), he earned knee-jerk comparisons to fellow pianist and ECM stalwart Keith Jarrett. Yet while their styles could hardly be more different, they do have one thing in common: a genuine respect for melody. It’s this sense of song and structure that balances Parks’ youthful optimism with patience.

On Groovements, he shares a studio with bassist Thomas Fonnesbæk and drummer Karsten Bagge. Despite being the first time this trio had recorded together—playing tunes written especially for this session, no less—these virtual strangers make for a cohesive mesh.

As if in service of that point, the group improvisation “Shapes ‘n’ Colors” is among the more seamless tracks. No less groovy than its satellites, the tune hits all the right pressure points and is every bit as flexible as Parks’ distinctly New York-ian “Elutheria.” Fonnesbæk and Bagge contribute two originals apiece, the former’s “Winter Waltz” and “Forever This Moment” being special vehicles for the composer’s artistry while the latter’s “Alcubierre’s Law” and “A Rabbit’s Tale,” not surprisingly, capitalize on the rhythmic core. The trio does bare its traditional chops, however, when handling the swing of Cedar Walton’s “Bolivia” and evergreen “You And The Night And The Music” with tact. Even the two surprises, Bruce Springsteen’s “I’m On Fire” and Danish classical composer Carl Nielsen’s “Tit Er Jeg Glad,” proceed with confident logic.

Danish vocalist Sinne Eeg is basically an unknown to American jazz listeners, but she's considered a vocal treasure on the other side of the pond. Three of her seven previous albums—Waiting For Dawn (Cope Records, 2007), Don't Be So Blue(Red Dot Music/EMI, 2010), and Face The Music (Stunt Records/Sundance Music, 2014)—have taken home Danish Music Awards, she was the recipient of the 2014 Ben Webster Prize, and she was awarded the Prix du Jazz Vocal by the French Académie du Jazz for Face The Music. So why hasn't she made her mark in America? Probably for the same reasons that so many other talented non-Americans don't get their due here: a combination of jazz xenophobia, a lack of visibility, and distribution issues.

Fortunately, it looks like Eeg is starting to make inroads in America, due in no small part to Eeg-Fonnesbæk, an intimate and emotive duo recital that pairs Eeg with well-travelled bassist Thomas Fonnesbæk. Together, they walk, stroll, and saunter through many a familiar song. There's a wonderfully languid and steamy "Willow Weep For Me," a haunting "You Don't Know What Love Is," a scat-friendly "Summertime," and a nuanced take on "Body And Soul" here. And lest these two be accused of only covering well-trodden classics, they deliver an entrancing take on Enrico Pieranunzi's "Fellini's Waltz" (with Lorraine Feather-penned lyrics), a Diana Krall-ish vehicle called "Taking It Slow" that's credited to Fonnesbæk and Helle Hansen, and Lionel Hampton's "Evil Man Blues" (with lyrics from the late Leonard Feather).

Throughout the album, Eeg proves to be an expert in the art of inflection. She stresses a lyric in unexpected yet appropriate ways, demonstrates unerring intonation and pitch control, and shows herself to be an impressive improviser and communicator. Her vocals are never overbearing, but there's no doubt about the fact that she's in the driver's seat. Fonnesbæk, not surprisingly, proves to be a sympathetic ally. He delivers rock solid riffs and he manages to establish and trace the harmonic foundations of a song while dancing along with Eeg. His acoustic bass work is completely grounded, locking in the time and adding weight to the music, and his electric work, filled with chord-anchoring notes, harmonics, and guitar-esque strums, helps to give the music greater textural depth. These two make for a perfect pair, making Eeg-Fonnesbæk a fetching date worth seeking out. Thomas Fonnesbaek: Sound Of My Colors

Fonnesbaek wrote nine songs for this, his debut album as leader, and decided the groove for all 12 numbers. The result is a more rhythm- driven music than the trio's usual meditative fare stemming from Jansson's Zen Buddhist beliefs. He contributed just one number, a funky tribute to Fonnesbaek, "El Bajista" (The Bassist). There are two standards, Gershwin's "Summertime," followed shortly afterwards—appropriately—by "Autumn Leaves."

In his sleeve note, Jansson sets the tone for the album. He says, "Thomas Fonnesbaek's music has a lot of strong grooves... nice chords to blow on." This is probably the closest the trio will come to a straight-ahead blowing session. Though, that said, the music they perform remains full of interest.

Fonnesbaek kicks off with one of his own numbers, the up-tempo "You Never Know," laying down a dark, brooding riff. Jansson's first solo is competent, the second magnificent. It all ends too soon in a clash of Svanberg's cymbals. "New Hope," another original, is a beautifully lilting ballad that also allows Jansson to stretch out, only this time in quieter, more contemplative fashion.

"Summertime" is given pretty muscular treatment with some brilliant work by both Fonnesbaek and Jansson, again particularly in his second solo where he goes further and further from the familiar melody and resists the temptation to return to it at close of play.

"Diversity" is a solo showcase for Fonnesbaek and it's a tribute to his technique and musical taste that it never becomes boring. "Green As D-minor," is a very relaxed ballad with bluesy inflections that slowly picks up momentum, with Jansson at his very best.

"Primordial" has some surprising twists and turns and "You And Me" is a wordless love song. As for "Autumn Leaves," written by Hungarian- French composer Joseph Kosma and first featured in the 1946 Yves Montand film Les Portes De La Nuit (Gates Of The Night), the trio take it apart and put it back together again, propelling it—in true Zen fashion—smack into the present moment. 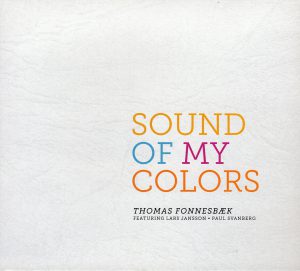